MAT9001 for Treatment of Hypertriglyceridemia

MAT9001 is a next generation, prescription-only omega-3 fatty acid-based composition under development for hypertriglyceridemia (TG>500 mg/dL), which has shown superiority versus Vascepa® (icosapent ethyl) in reducing serum triglycerides, total- and non-HDL-cholesterol, apolipoproteins and PCSK9 levels. MAT9001 is comprised of docosapentaenoic acid (DPA), a potent but less prevalent omega-3 fatty acid with very unique properties, and other omega-3 fatty acids. MAT9001 was developed based on the newest scientific advancements in the field, incorporating and building upon the knowledge of almost 40 years of scientific research in the omega-3 discipline.

We believe that based upon MAT9001's unique composition, it will prove to be differentiated from other existing therapies for the treatment of very high triglycerides ("hypertriglyceridemia") and dyslipidemia. Unlike the current approved therapies in this product category, many of which have been repurposed following clinical failures in their originally intended indications, we have specifically developed MAT9001, which has been designed to optimize and target the treatment of hypertriglyceridemia and mixed dyslipidemia. We believe that the results of these targeted development activities and related clinical investigations may yield a stronger therapeutic profile compared to the currently-existing therapies, characterized most importantly by MAT9001's differentiating mechanistic features associated with its unique composition and enhanced potency.

Matinas BioPharma is developing MAT9001 for therapeutic applications in the dyslipidemia field, with severe hypertriglyceridemia (TG>500 mg/dL) as the primary indication. Based on promising early data, the Company filed an Investigational New Drug Application (IND) with the U.S. Food and Drug Administration (FDA) in the fourth quarter of 2014. In addition, the Company completed a more than 50-patient comparative PK/PD trial of MAT9001 versus an active omega-3 comparator and has shown superiority versus Vascepa® (icosapent ethyl) in reducing serum triglycerides, total- and non-HDL-cholesterol, apolipoproteins and PCSK9 levels.

More information of the comparative PK/PD study results can be found in the poster entitled, "Effects of MAT9001, an Omega-3 Fatty Acid Drug, Compared with Eicosapentaenoic Acid Ethyl Esters, on Triglycerides, Lipoprotein Cholesterol and Related Variables in Hypertriglyceridemic Subjects." 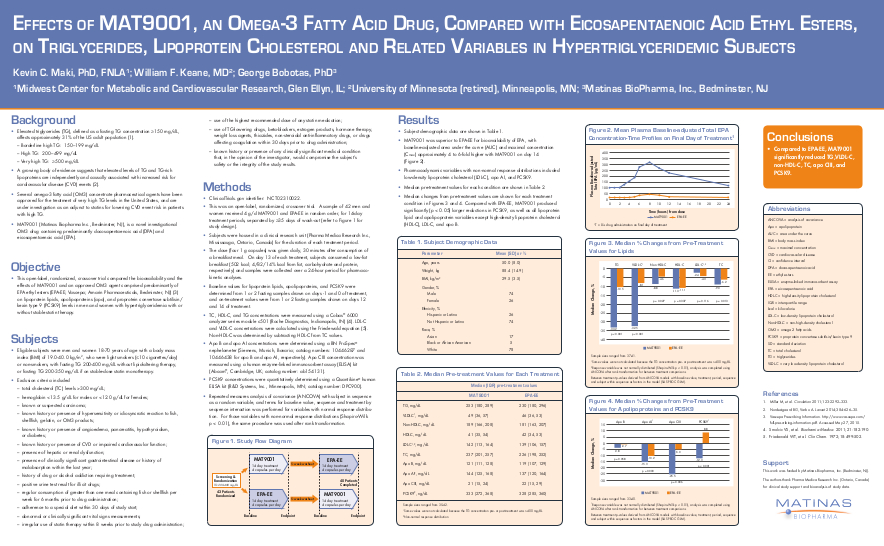 About Severe Hypertriglyceridemia and Mixed Dyslipidemia

Hypertriglyceridemia is a medical condition typically caused by genetic predisposition and lifestyle. The obesity epidemic in the U.S. and other advanced and developing economies has been a major driver of the growth of this condition over the last few decades. Hypertriglyceridemia is a condition in which fat concentrations in the blood have increased and are persistently above "normal" levels (above 150 mg/dL in the morning, before breakfast).

In the U.S. alone, according to the epidemiological data in the most recent treatment guidelines from the NIH NHLBI NCEP ATP-III, approximately 16% of U.S. adults have elevated triglyceride levels above 200 mg/dL (high levels of fat in the blood). This amounts to more than 40 million Americans.

Approximately 3% of U.S. adults have severe Hypertriglyceridemia, with very high triglyceride levels (TG 500 mg/dL or higher) and often relatively low cholesterol levels. These individuals are not only at risk for acute pancreatitis (a serious and painful inflammatory condition of the pancreas), but may also more likely suffer from cardiovascular events such as heart attacks, strokes, etc.

Adults with triglyceride levels in the range of 200-499 mg/dL often display a combination of both high triglyceride and high cholesterol levels, a condition called mixed dyslipidemia. This condition affects almost 13% of U.S. adults, or more than 30 million individuals. Due to the nature of their condition, these patients are at higher risk for cardiovascular events, including heart attacks, strokes, etc.

Many of these patients are on a statin therapy to reduce their cholesterol levels. However, due to the limitations of medications currently available for reducing triglycerides, relatively few receive treatment for their elevated triglyceride levels.